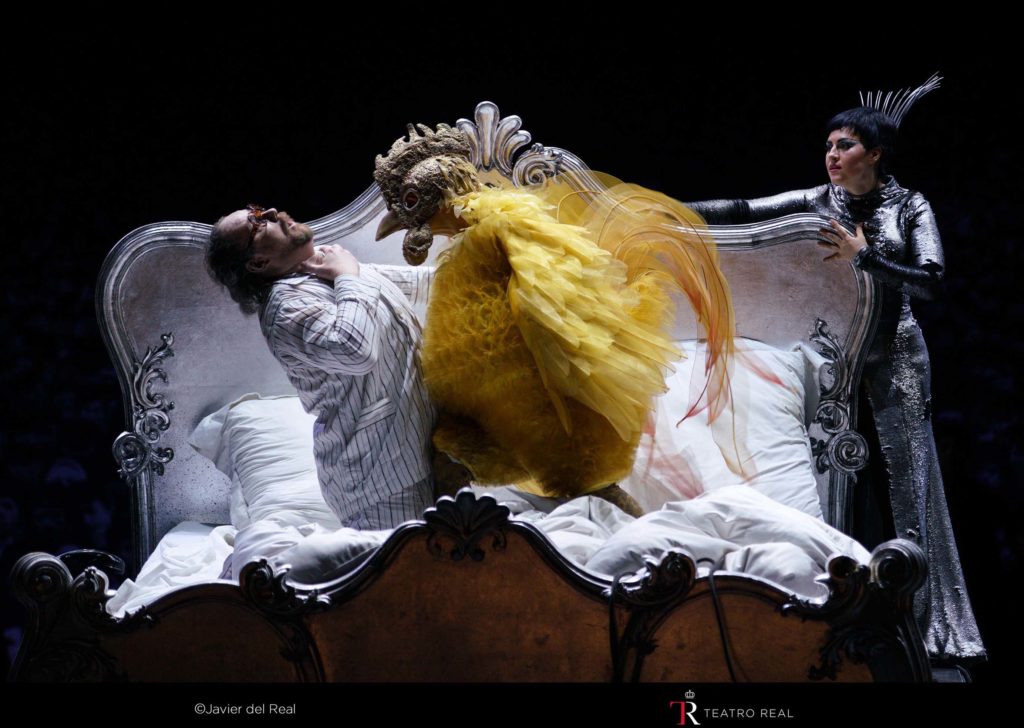 The spanish premiere of one of the most famous Russian operas by N. Rimsky-Korsakov “The Golden Cockerel” based on the poem “The Tale of the Golden Cockerel” by A. S. Pushkin took place from 25th of May to 9th of June in Teatro Real in Madrid. Dmitry Ulyanov played the title role – Dodon – despotic, but at the same time childish and capricious and tired of all the pleasures of the tsar’s life. For Dmitry it was the debut in the role of Tsar Dodon on the scene of the Teatro Real, where he’d sang King René in “Iolanta” by Tchaikovsky, Pimen in Mussorgsky’s opera “Boris Godunov”, Don Basilio in “Il barbiere di Siviglia” by Rossini and other roles before.

Performances with  Dmitry took place on 25, 28, 31 of  May and 3, 5, 9 of June 2017. Musical director – Ivor Bolton. The director and costume designer was Laurent Pelly.  The part of Tsaritsa of Shemakha was performed by Venera Gimadieva. Tsarevich Gvidon – Sergey Skorokhodov, Tsarevich Afron – Alexey Lavrov and Alexander Kravets sang the role of Astrologer .

“Great bass Dmitry Ulyanov whose career ranges from roles in “War and Peace” to “Aida”, from “Prince Igor” to “Les Huguenots”. Powerful and well balanced voice, also able to underline the many comic situations. Intense lamentation all vocalizes when he discovers the death of his two sons who self-destructed. Ulyanov is also a good actor exaggerating the clumsiness of the foolish tsar, having fun in the short ballet of the second act.”

“The bass Dmitry Ulyanov is a perfect Dodon Tsar: both in the acting of a fat, clumsy grandfather and in the bright, vigorous, ductile voice even in the most difficult moments (for example, endurance at the sight of dead sons, at the beginning of the second act) .”

“A few years ago in the concert version of “Les Huguenots” at the Teatro Real in Madrid, Dmitry Ulyanov demonstrated his bright bass. This is the ideal Tsar Dodon, both vocally and artistically.”
— Gonzalo Alonso (beckmesser.com)