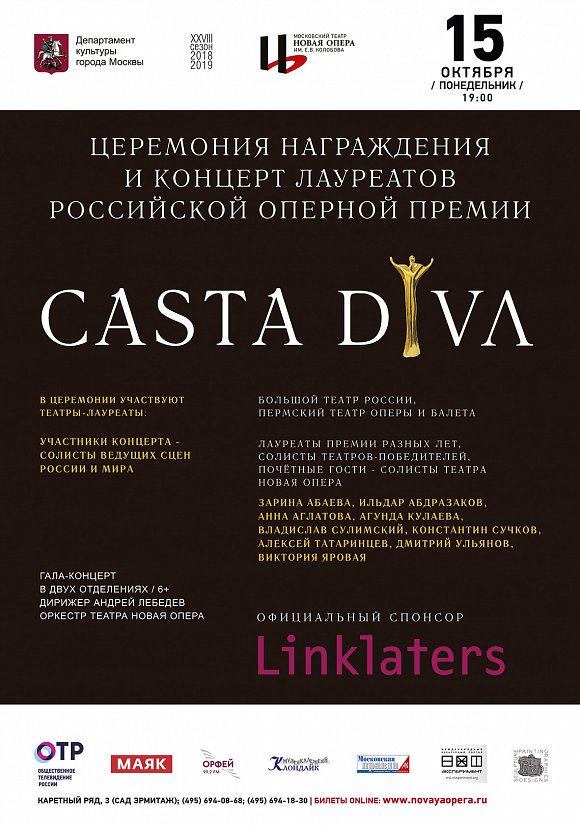 In 2015 Dmitry Ulyanov won the prize  of Russian Opera award “CASTA DIVA” as  “Best male singer of the year” for the role of Ivan Khovansky (“Khovanshchina” by Mussorgsky) in the production of the Stanislavsky and Nemirovich-Danchenko Moscow Academic Music Theatre, however,  he couldn’t take part in the last award ceremony.  But this year on October 15  Dmitry will take part in the award  ceremony and concert of the winners, which will be held at the Kolobov Novaya Opera theater of Moscow.

In the Gala concert you will also be able to hear the winners of “CASTA DIVA” award of various years, soloists of the winning theaters, as well as honored guests-soloists of the Novaya Opera theater. Among them: Zarina Abaeva, Ildar Abdrazakov, Anna Aglatova, Agunda Kulaeva, Vladislav Sulimsky, Konstantin Suchkov, Alexei Tatarintsev etc. The soloists will be accompanied by the orchestra of the Kolobov Novaya Opera theater of Moscow under the baton of Andrey Lebedev.